The cold option: freezing the fat away with CoolSculpting for Men :

Fat cells are damaged by extremely cold temperatures, and CoolSculpting for men takes full advantage of this. To start, your overly-plump love handles are suctioned into the CoolSculpting device’s treatment chamber. The temperature is gradually lowered, eventually exposing your unwanted fat deposits to a brief period of extreme cold. At a certain threshold temperature the fat cells rupture and are then gradually reabsorbed by the body.

Extreme cold? It sounds worse than it actually is. Most patients report that it’s fairly uncomfortable yet stop short of calling it painful. There’s also no downtime. After your treatment you can return to work immediately. Or hit the gym, go running, snowboarding, cliff diving, or whatever else tickles your fancy. The treatment itself takes approximately 60 minutes then you’re out door and on your way.

CoolSculpting isn’t cheap, but it doesn’t cause the kind of sticker shock of you’re likely to get with lipo. The cost will ultimately depend on the region you’re getting treated and how many treatment sessions you’ll need. CoolSculpting prices vary by region and other factors, but anywhere between $2,000 to $4,000 is a fair estimate.

“If your fat deposits are relatively small a single treatment may be all you need. I see it all the time. If they’re larger then you’re looking at 2 or even 3 treatments. It’s a matter of size,” says Dr. G. “Right now CoolSculpting is the industry standard for non-invasive fat reduction. It’s predictable and there aren’t any surprises. We’re able to get the same good results, time after time.” Managing the Risks of CoolSculpting

CoolSculpting is a breakthrough medical procedure that melts away unwanted fat cells before your eyes. CoolSculpting, also referred to as cryolipolysis, has several key benefits. However, if you’re considering this procedure, you want to be fully aware of any potential risks, just like you would with any other medical treatment.

CoolSculpting uses cutting edge equipment to lower the temperature of targeted areas underneath the skin. During the procedure, a plastic surgeon or other licensed practitioner will place the cooling tool on your trouble spots. There are a variety of different attachments, specially designed to attack stubborn fat cells all over the body. By lowering the temperature, the procedure effectively kills the fat cells. The dead cells are then broken down and expelled through the body’s natural process over the next several weeks.

The U.S. Food and Drug Administration (FDA) has approved CoolSculpting technologies as a safe option for medically treating unwanted fat. The many benefits of CoolSculpting over traditional liposuction are obvious. CoolSculpting is noninvasive, nonsurgical and involves no painful recovery time. Studies have shown that CoolSculpting is highly effective in reducing fat cells. Up to 20 to 25 percent of the fat cells in a given area can be removed after treatment.

With all the excitement surrounding CoolSculpting, it is important to know that it is not recommended for everyone. There are some potential side effects associated with CoolSculpting. I provide more detail below.

The 4 most Common Side Effects of CoolSculpting

Although CoolSculpting is a noninvasive and nonsurgical medical procedure, there are some potential side effects.

1. Pulling or Tugging at the Treatment Site

Some people report the sensation of tugging or pressure as the procedure is taking place. During a CoolSculpting session, your healthcare professional will position a roll of fat between two specially designed cooling pads. This will focus the optimal cooling power on the part of your body that is being treated. As the session goes on, it can create an uncomfortable feeling of tugging or pulling. You will only have to tolerate it for up to an hour or two, which is the typical length of the procedure. As soon as the session is over, the discomfort will stop.

2. Stinging or Aching at the Treatment Site

This nagging feeling can last over a week. Studies have shown that a number of patients experience what they describe as “pain,” “stinging,” or “aching” at the site of treatment. Typically these sensations would begin a few hours after the end of treatment and last a week or two. It is likely that the skin’s prolonged exposure to very cold temperatures is the cause. Studies have not shown any damage to the effected skin or tissue.

A study completed in 2015 followed the progress of individuals after 554 CoolSculpting procedures (some individuals had more than one session over the course of the year). The researchers found that if any post-treatment pain was experienced, it typically lasted three to eleven days and cleared up on its own.

The most common side effects of cryolipolysis are localized to the area of treatment and go away on their own. These mild, temporary reactions include:

These temporary conditions are likely the cause of exposure to the low temperatures utilized in CoolSculpting. In the vast majority of cases, the side effects go away after a week or two on their own. Prolonged exposure to CoolSculpting’s cold temperatures can affect the skin in a manner similar to frostbite. It is, however, perfectly safe and does not cause frostbite. The cold targets the unwanted fatty tissue just below the skin and does not cause permanent damage to the skin or other tissues.

Should I Avoid CoolSculpting? 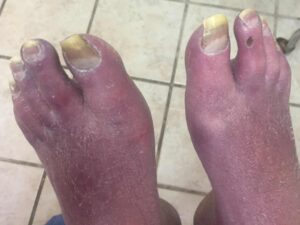 For most people, CoolSculpting is a revolutionary, risk-free and effective treatment that promises to help in reducing body fat. There are, however, some people who should avoid CoolSculpting. If you have one of the following medical conditions, you should not undergo CoolSculpting:

CoolSculpting can trigger serious complications in people with these preexisting conditions.

Whether or not you have the disorders listed above, you should talk to a trusted medical professional before booking an appointment with a plastic or cosmetic surgeon to perform CoolSculpting. He or she will be able to help you decide if CoolSculpting is right for you.

It is important to understand the limitations of CoolSculpting. Cryolipolysis can help eliminate small concentrations of stubborn fat that are not responding to diet and exercise alone. CoolSculpting is not an effective treatment for obesity.

CoolSculpting offers some significant benefits over more traditional fat-reduction procedures. Fat cells are exposed to low temperatures, are broken down and removed from the body using the natural metabolic processes. Once eliminated, they do not return. Cryolipolysis is a noninvasive procedure, which means no incision, no scar, no risk of infection, no anesthesia and no pesky rest or recovery time. The remarkable  results can start to show in as little as three to four weeks. The majority of people see their peek results around three months after their last treatment. Cryolipolysis is not for everyone. Talk to your doctor about CoolSculpting to find out if it is safe for you.