How to Get Rid of Love Handles

How to Get Rid of Love Handles

Modern, minimally invasive liposuction has advanced to the point where it can treat nearly any area of the body. The majority of procedures, however, are performed in the same four areas: the abdomen, flanks (love handles), thighs, and buttocks. For men in particular the abdomen and flanks account for almost all cases. The one unexpected outlier is male breast reduction, which is by far the is the fastest growing male liposuction procedure being performed today.

As a group, men have slightly different concerns than women when it comes to liposuction. Put simply they’re looking for a sculpted final look. What this specifically means is the following:

“Ripped” or “six-pack” abs in which the individual compartments of the abdominal muscles are visible. While presumably all lipo patients want improved body contours, achieving this definition.

The “V” shape. Men usually have more developed back muscle mass than women, and are therefore more apt to have a naturally “V” shaped upper body. This coveted shape is a large part of being perceived as having broad shouldered, regardless of a patient’s actual measurements. This look is commonly associated with youth, power, and athleticism.

Yet no matter how large these muscles are fat deposits in the flanks (love handles) can ruin this effect. That’s why, by percentage, the flanks are the second most treated region among male liposuction patients. When done correctly this can also lend a sculpted look to the abdominal muscle of the sides, namely the obliques.

As mentioned, an increasing amount of men are also concerned with fatty deposits in the breasts. This condition is technically known as gynecomastia, and is sometimes tactlessly referred to as “man boobs.” Much as with love handles, gynecomastia can detract from the ideal broad shouldered, broad chested look. Again, regardless of muscle mass an area can become “camouflaged” by unwanted fat deposits.

Perhaps more importantly most men simply don’t want to have breasts. This is understandable, and is by far the most common reasons males choose to undergo liposuction for permanent breast reduction.

Regardless of the area in question, the saying “if you can pinch it, we can treat it” is more true than ever before. Modern liposuction techniques now have the precision necessary to remove small amounts of fat in a very controlled manor. This makes improved definition of the upper body muscles possible, which is a huge draw for men. 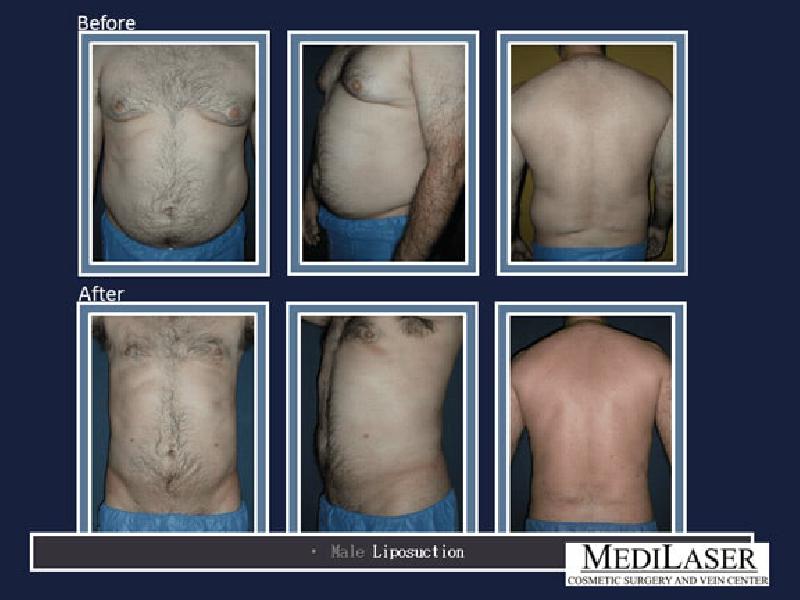 Recovering from your procedure

While it may be minimally invasive liposuction is still a surgical procedure. A short recovery period is involved, and some level of discomfort is to be expected. This being said, side effects are generally mild and liposuction has an excellent track record of safety.

After your procedure you’ll experience mild-moderate swelling and bruising. You can expect the swelling to subside completely in under a month. Liposuction induced bruising resolves exactly as any other bruising, usually in about two weeks.

Some minor sensory changes or loss of sensation in the region is common. While this might seem ominous, e.g. “nerve damage,” it’s actually quite harmless. In virtually all cases full, normal sensation returns in a manner of weeks. Again, it’s almost unheard of for this type of sensory loss to become permanent.

Relative rest is recommended for at least the first two days after the procedure. You should take it very easy, engaging in only the least strenuous activities. Walking short distances, such as around the house, is strongly recommended. This increases circulation and will speed the healing process. Other, more strenuous activities should be avoided. Most patients can return to a non-manual, office type job in under a week.

In the period immediately following your liposuction you’ll almost certainly experience moderate pain and discomfort. Most patients opt for a short course of prescription pain medications during this time. After several days, over-the-counter (OTC) pain medications such as Motrin (ibuprofen) and Aleve (naproxen sodium) are typically all that’s needed.

Individual recovery times vary, and are largely based on the area treated, the amount of fat removed, and the overall health of the patient. It’s important to abstain from strenuous exercise in the weeks following your procedure, even if you feel up to it. Follow your surgeon’s instructions exactly, resuming full activity only when you’ve been cleared to do so.