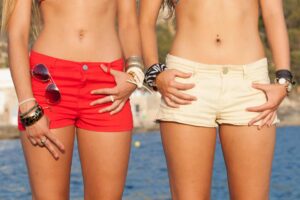 How does Water Jet Assisted liposuction work exactly? What are the newer technologies and approaches to the procedure, and how do you like them?

Dr. Giraldo: The idea is simple. Numb the region. Make an incision above the area. Then use a blunt probe attached to a surgical vacuum to break up fat deposits and suction them out. Simple, right? I’ll also put forward that I’m a big fan of WAL.

I use WAL daily. That’s Water Jet Assisted Liposuction for all the non-surgeons. A big problem, maybe the fundamental problem, is that fat deposits are fairly well attached. So it’s more like you’re ripping it out than sucking it out. That’s why liposuction just wasn’t very good in the 80s and 90s. You’d get the lumpy, bumpy look, and it was super invasive and the recovery could be rough. Did it work? Yes, most of the time. Was it easy? No. In fact for a lot of patients it just wasn’t worth it.

With Water Jet, we’re using a fan-shaped water pick, sort of like what your dentist cleans your teeth with. It breaks up the fat before we suck it out. Problems solved. Don’t get me wrong, I’ve always enjoyed doing lipos, it’s just that now I love them.

I’ll briefly touch on tumescent anesthesia. Water Jet and all the other modern techniques, all of which are fantastic, couldn’t happen without it. Tumescent anesthesia is the practice of injecting large amounts of diluted anesthetic fluid into the region. This does two things. First, It provides anesthesia. Obviously. But more than that it plumps up the tissue, making it much easier to remove.

Using a water jet to pick apart a solid fat deposit is one thing, you can do it but I wouldn’t recommend it. But when you pump in the fluid it changes everything. It’s like you’re brushing the fat away, almost layer by layer. It’s brilliant.

Tumescent technique and WAL and other techniques let me perform lipo pretty much everywhere. It used to be abdomen, flanks, butt, breast reductions, and that’s it. Now we’re doing chins, arms, necks, even ankles. Let me put it to you this way. Would I have wanted to get lipo 20 years ago? Nope. Would I today? Yes. It’s a different ballgame now, the procedures have gotten very, very good.